The exciting new 2022/23 biennial edition will help you plan your next fishing adventure.

FISH FINDER has the information you need to catch one of the $10,000 barramundi tagged in the NT’s annual Million Dollar Fish promotion.

There is information about lucrative fishing competitions in southern waters, and a heap of updates.

The 14th biennial edition of the biennial North Australian FISH FINDER went on sale in April 2022.

If you love fishing, this is your book.

The book covers most of the mainland coast, and is particularly detailed in the remote north where it is dubbed ‘the bible’.

FISH FINDER has the information you need to catch one (or more!) of the dozens of $10,000 barramundi released each year for the NT’s Million Dollar Fish promotion.

The book also has information about many other lucrative fishing competitions.

For the NT mob, this new edition has charts of previously unrevealed Shady Camp snapper and jewfish reefs.

There is a superb bathymetric map of Darwin Harbour with a Lat-Long grid for taking GPS marks off any feature that looks fishy. Just about every patch of reef is revealed.

For Queenslanders, there is exclusive multi-page aerial low-tide photography on Ayr, Mackay and Townsville creeks and rivers.

Some of the charted areas include:

There is great information for Cape York Peninsula, including …

The SEQ section is superb …

There’s a vast WA section, from Perth north to the NT border. Highlights include …

*Dampier Peninsula fishing camps near Broome
*Huge Pilbara and Kimberley coverage. See the shallow estuaries around Port Hedland and Karratha at low tide
*Almost all of the Kimberley coast is covered by satellite imagery

FISH FINDER TM includes the NSW coast from border to border, including …

This exciting book has amazing aerial coverage, so you can see the layout of estuaries to assess potential fishing spots. 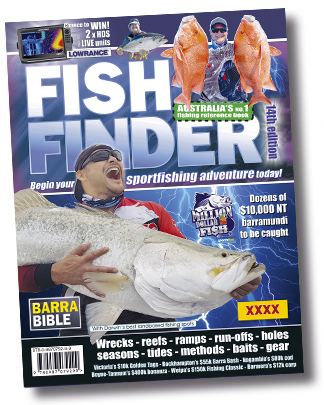